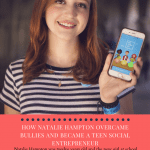 Natalie Hampton was twelve years old and the new girl at school when she started getting bullied. By the end of the seventh grade, things had escalated so much that she was physically attacked three times in the space of two weeks.

“I was coming home sobbing with bleeding red scratch marks down my faces and bruises” Natalie recalls.

When she reported these incidents to her school’s administration, nothing happened. Instead, she was blamed and asked to see a counselor to help her uncover why she was getting bullied.

“Teachers did nothing. The students around me did nothing. And at that point, I just realized that things weren’t going to get better because throughout this two year period I was pretty much ostracized by everyone and ate lunch alone pretty much every single day.”

It wasn’t until she moved to a new school that the bullying stopped and that she felt safe at school again. Even though she was having a much better experience and had great new friends, she started to feel guilty thinking of other bullied kids that don’t get a chance to break away by changing school and felt compelled to do something.

That urge led her to develop and launch the Sit With Us app to facilitate lunch meetups amongst students so that no student would have to sit alone at lunch.

RSG: How did the ideas specifically for an app come up or did you consider other ideas before you landed on the app idea?

Natalie: I know I wanted to do something but I didn’t know what. And so I tested out a lot of things and did a ton of research and one thing that’s super popular is a lot of elementary schools is a buddy bench where if you like want friends, you sit on the bench and someone will come find you. But I feel like that’s really vulnerable. And so I was trying to find a way for kids who need to find a place to sit at lunch to be able to identify themselves, but not in a way that’s vulnerable or that would require them to essentially open themselves up to getting bullied.

And so I thought an app was the best way to do that because you can reach a lot of people and also it’s very private.

RSG: Gotcha. Did you know how to build apps?

Natalie: Definitely not. I was 15. I knew absolutely no coding and I presented this idea to my parents with a whole lot of jazz hands and thankfully they supported me. I began taking coding classes right away and I actually got to work side by side with a professional who kind of helped walk me through everything. And so I got to learn so much in the process of building the app.

I basically got a notebook and drew out rectangles on every page to represent every single page of the app. That helped me get a clear idea of what I wanted and the functions and the buttons and everything. I was kind of able to do all the graphic design and do all the functions and then hand it over to someone who could make it a reality.

RSG: Oh, that’s awesome. How long did the whole process take from idea to manifestation?

Natalie: The idea was probably born around February 2016 and then coding went into the summer, maybe July, and then we were beta testing, which was so grueling and time consuming till probably around September when we released in the app store.

RSG: Oh, that’s not too long. About six months?

Natalie: Yeah, and it felt like forever because I went through more than a thousand versions and every time there’d be a bug or a typo, but we just kept persevering. We actually got rejected from the app store once. We went back, fixed the issue, and applied again.  It just took a lot of determination.

RSG: That’s awesome. Now, were you at this point thinking about forming a company around this or you were just thinking I’m going to build this app and throw it out there? Or were you thinking it would be a nonprofit company or a for-profit company or if you would charge for this service? Or any kind of business model.

Natalie: Yeah, that’s a really good question. I did not expect this app to go anywhere. I thought that I could roll it out at my school, maybe my best friend’s school and that it could potentially help a few kids.

And it was almost more like a therapy project because it was helping me deal with what I went through. From the first day that we released, there were news articles coming out that day and NPR contacted us. I was on the show by the end of the week. And so it just kind of snowballed and exploded in ways I never imagined and we started getting requests for it in all different countries. And so it was at that point that we realized that we should probably ( … because I never wanted to run ads or make money off of it) make it a nonprofit.

RSG: When you were building it, were you testing it with actual students? Did you incorporate friends in the design at all or in the testing to see if you got it right?

Natalie: Yeah, I was working on a college campus doing a summer program at the time and I got all the people in my summer programs to help beta test with me. And so they were inputting their classes and research schedules and planning lunches with each other with it and giving me feedback.

RSG: So cool. At what level are you implementing it right now? Schools? Districts?

Natalie: So the best way it works is if students within a school start the initiative themselves. They can start a club, get a bunch of people interested, register their school in the app and then start posting. We’ve had that kind at many schools. Right now we’re in 31 countries, I believe. And we just released in Spanish as well and working on translating a few more languages.

We’ve got schools connected across the globe and at the same time, it’s not just schools which is really surprising. We found out that a lot of different types of venues are using it, such as convention centers or places of worship and that nurses at the local hospital using it to coordinate their shifts. And so it kind of has a lot of different applications that I didn’t anticipate at all.

RSG: Oh Interesting! Now, who have you been able to lean on for support on this? I know you mentioned your parents being helpful, especially when you first had the idea, but I’m imagining you’ve had some mentorship along the way or some support of some kind to help you get to where you are.

Natalie: Yeah. When I say we invented Sit With Us, it’s just me and my mom. It has been just the two of us.

Natalie: We’re kind of a little team in this and we lean on each other for support. But that’s kind of the only mentorship I’ve gotten along the way.

RSG: That is so fantastic because that you and your mom are modeling co-learning and co-innovating we encourage within our community.

Natalie: Yeah, my mom has kind of been there since the beginning. She was the first person that I told about all the bullying. She supported me through applying to different schools and she supported me with this crazy idea and has helped me pretty much every day since. And I’m so grateful for that.

RSG: Well, that’s awesome. Now as a nonprofit, and I’m sure you guys have enough attention that you should be able to rate funding from organizations that care about this kind of cause, are you guys able to start to get some funding to move it forward or you’re still funding it by yourself?

Natalie: Yeah, so thankfully we’ve been able to receive some really large grants from companies such as Samsung, Disney, Hollister, and a couple of others and they’ve pretty much just come forward to help. For example, Samsung gave us all the money we needed to create an Android version of the app.

RSG: So you launched this app 3 years ago now, what are you up to these days?

Natalie: I am in my Sophomore year studying psychology and child development at Stanford University.

RSG: Cool. What are you thinking you might do with that?

RSG: Did any of your experience in developing this app and building this company help inform where you’re headed in terms of your career?

Natalie: I think definitely. I mean, most importantly, it’s really put a positive end on a story that was so painful to me for so many years. I was not even able to talk about it without completely breaking down. And now that it’s kind of become my job to tell my story and kind of get other people involved, it’s definitely helped me get over what happened. And so I think that’s what helped me more than anything else, but the connections that I’ve made through this and the people that I’ve met and the skills that I’ve been able to build up over the years are definitely so valuable and I’m excited to see how they help me in the future.

RSG: Yeah. Awesome. The last question that we ask is always How were you raised?  What about the way you were raised gave you the courage to do this and gave you the exposure to even think about executing it?

Natalie: Yeah. Wow. That’s a really good question. I think that my parents raised me to have an activist mindset. Ever since I could even understand words, they have been telling me that if you’re upset about something in the world, do something about it. And so whatever I cared about at the current moment, they’d always really support me in doing something about that. So when I was little I was obsessed with dogs, and so they would take me to shelters to walk the dogs and they helped me do a toy drive in the winter to collect toys for them. Activism and social good have always been part of our family.

And so I think that when I was going through my bullying experience, they actually really stepped that up. And so it was actually really helpful when I was feeling like I was completely useless and worthless and invisible to kind of go and feel like I am making a positive difference in someone else’s life.

Natalie’s app has been downloaded over 100,000 times. Among other honors, she is a TEDxTeen, UN Outstanding Youth Delegate, and the recipient of that Mensa Foundation Copper Black Award. You can learn more about the Sit With Us app by visiting the website or by following on social media.