How to Make Cloud Slime 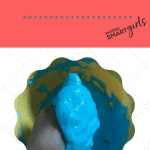 Cloud slime is slime that is softer in texture. When you pick up a handful of cloud slime and let it fall back to the table, instead of pouring out of your fingers like a waterfall like a regular slime would, cloud slime does something similar to like how snow falls from a cloud! Another way to describe the strange but amazing texture of this slime would be that it is very similar to kinetic sand. To make cloud slime, you are going to need Instant Snow (you can find this online or at a craft store). Start with a regular slime or a fluffy slime for a fluffier texture. Here’s our recipe using fluffy slime.

3. To the glue, add food coloring if you would like and add shaving foam to the glue mixture, the more shaving foam you add the fluffier your slime will be. Mix well.