How to make Magnetic Slime 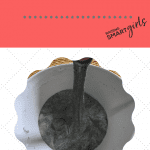 Want to see slime come alive? Add some iron oxide to your slime. Since this recipe can get real messy, you may want to use disposable gloves during the mixing of the iron oxide. Remember that magnetic slime should not be ingested.

3. To the activator, add about 3-5 tablespoons of the iron oxide and stir until smooth.

5. Now you can use the neodymium magnets to make your slime come alive!