How to Make Iceberg Slime 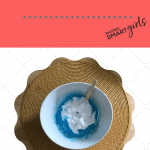 After making your fluffy slime, it is possible to create an iceberg slime! With iceberg slime, a barrier of dried slime is left on the top of the container where you are keeping your slime. You are then able to break the dried barrier to poke into the fresh slime underneath! To make iceberg slime, you are going to need to use fluffy slime.

3. To the glue, add food coloring if you would like and add shaving foam to the glue mixture, the more shaving foam you add the fluffier your slime will be. Mix well.

5. Find a container to keep your fluffy slime in.

6. Knead your fluffy slime for a short amount of time, then put in your container and leave uncovered either in the fridge or just out in the open!

7. After a day or two, the top of your slime will dry out and you will be able to crunch the top!